DISCOVER / What was Poe Reading? 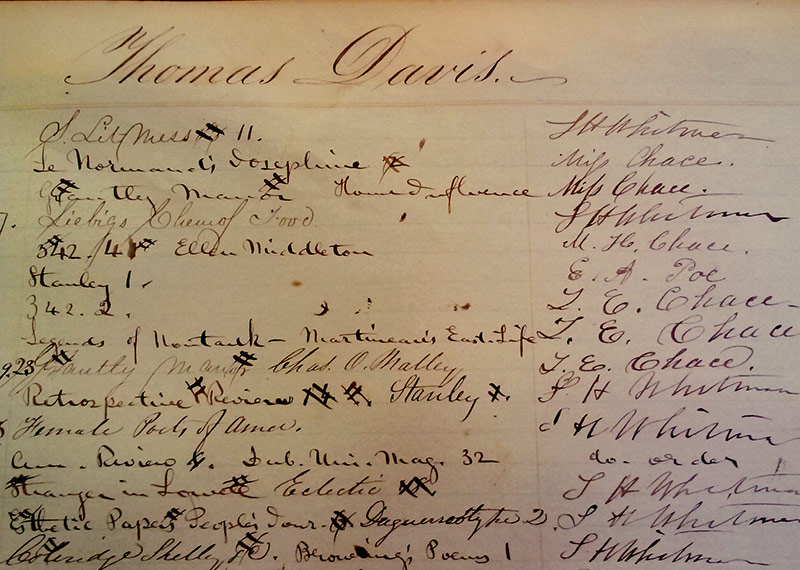 The charging books of the Providence Athenæum detail the circulation records of members, their families, and friends. During 1848 Edgar Allan Poe was briefly engaged to Providence native Sarah Helen Whitman, and the two courted in the stacks of the Providence Athenæum (click here to learn more about their story). A well-respected poet herself, Whitman was closely affiliated with prominent authors in Boston and New York, and a hostess of literary salons in Providence. While the time Poe spent in Providence as well as his courtship with Whitman were brief, the two explored the literary collections together at the Athenæum, and Poe checked out at least one book.

On December 21, four days before Poe’s planned Christmas Day marriage to Whitman, he checked out Stanley, vol 1, a two volume novel titled Stanley: Or, Recollections of A Man of the World. Published anonymously, it was later attributed to by Horace Binney Wallace. Wallace wrote under several pseudonyms and published in Burton’s Gentleman’s Magazine at the same time as Poe, with whom he corresponded. Poe used the share of Athenæum member Thomas Davis to borrow the volume, and his signature can still be seen in the Athenæum’s 1848 Charging Book (sixth from the top in the right-hand column).

Two months after the end of their romance, Whitman took the book home to read in February. Poe was to die later that year on October 7th, 1849 in Baltimore. Despite the short-lived romantic attachment, Whitman continued to write about and defend Poe against his attackers until her own death almost thirty years later.

Click here to read the full text of Stanley.